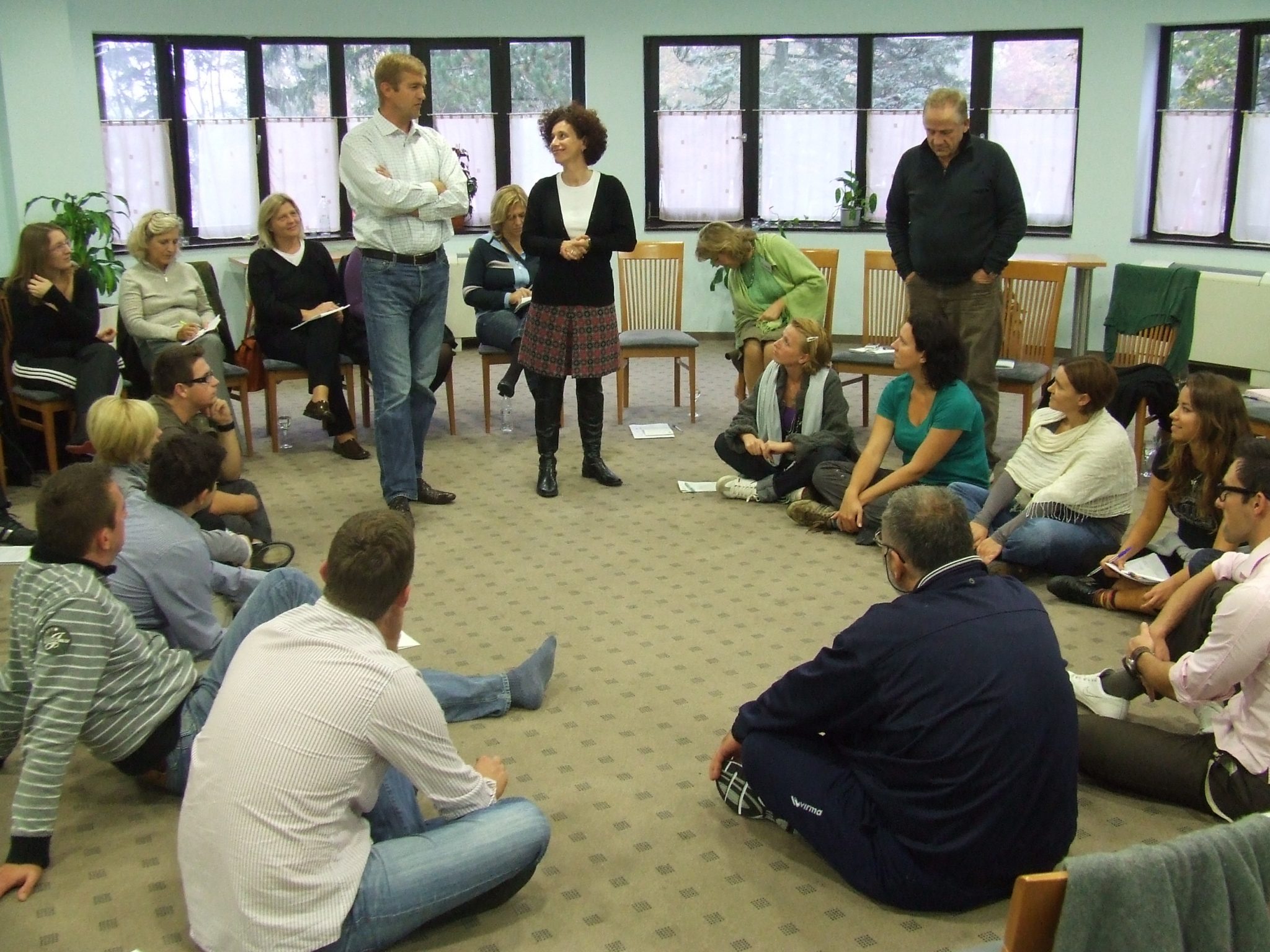 1996- 2001
Just after the war, in 1996, Arlene Audergon and Lane Arye facilitated a forum for the first time in Osijek, coordinated by the International Rescue Committee. Udruga Mi, an NGO in Croatia formed and developed close links with organisations throughout Croatia. Audergon and Arye worked in close cooperation with Udruga Mi and UNHCR. We facilitated forums twice a year supported by the UNHCR, Open Society, OTI, OSCE, the Threshold Foundation and Norwegian, Danish, British, Dutch, and Belgian embassies.

Each four day forum had approximately 80 people, from all sides of the war, and with their own war experience and trauma. Participants were from local NGOs local authorities, and international organisations, from a wide range of professions and activities all dealing with  painful  and volatile issues  in their communities. In the forums these groups worked together on the conflicts and issues they met in the field. The forums were deeply emotional. Many hundreds of people attended these forums, and were touched in ways that impacted them personally and in their contributions and leadership in community

2006- 2012
CFOR worked as a Partner organisation with Udruga Mi, designing and implementing several projects in all ‘Areas of Special State Concern’. These parts of Croatia had been devastated by the war, and were having serious difficulties to recover, economically and emotionally.

We held Forums for facilitated dialogue, and Leadership and Facilitation Training programmes. Arlene and Jean-Claude Audergon facilitated these programmes.

The projects were supported by UNHCR, with financial support from Dutch and Belgian embassies, the Spanish government, and the Milenium Fund.

In an exciting and important model developed by Udruga Mi and CFOR together with UNHCR, our programmes also linked economic recovery with emotional recovery and conflict transformation. The forums focused on  blocks to community development, and the importance of grappling with issues of accountability and collective trauma. At the same time participants engaged in economic initiatives in their communities and received capacity support from Udruga Mi. When blocks arose, especially related to polarisations in community, we had opportunities to work directly with the project blocks within our Training seminars and Forums and discover pathways forward.

Several articles and chapter contributions have been written about these projects. Arlene’s book, The War Hotel: Psychological Dynamics of Violent conflict, Wiley – Whurr 2004 includes descriptions of the work.

A project handbook was written by Arye, Audergon, Audergon, Bijelic, Ivelja and Skopje, called ‘Back to our Future: A handbook for post-war recovery and violence prevention’.