Structural Discrimination and the System Edge

Far In Far Out: Structural Discrimination and the System Edge

– Pulling on the invisible thread – 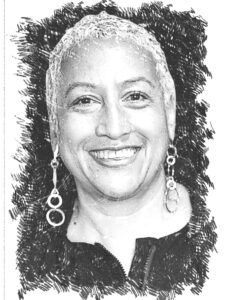 Joy Warmington’s project addresses a profound need across society. Her work seeks to uncover and transform the recurring systemic dynamics that perpetuate dynamics of structural racism.

‘Pulling on the invisible thread’ is Joy’s attempt to describe the often unseen impact of structural discrimination and also our inability to be able to locate ways that (we) as facilitators can use our skills to address it.

This project is positioning the opportunity for those who facilitate anti-racism to find in themselves a ’thread’ to pull on.

This is not in an attempt to ‘blame’ facilitators for a perceived lack of skill and in doing so negating the power of institutional discrimination, but to enable facilitation of this issue to be undertaken in a spirit of hopefulness –  to find threads to pull and threads to follow.

By way of an in-depth study of her own work as facilitator, and as a Black woman, Joy will pull together and pass on her learning from decades of practice. Joy says her work ‘centres on the belief that it is possible for things to change – despite everything that we experience that would indicate that things stay stubbornly the same.’

Joy speaks of Derrick Bell’s ‘fifth rule’ of racial standing:
‘True awareness requires an understanding of the rules of racial standing. As an individual’s understanding of these rules increases, there will be more and more instances where one can discern their workings. Using this knowledge, one gains the gift of prophesy about racism, its essence, its goals, even its remedies. The price of this knowledge is the frustration that follows recognition, that no amount of public prophecy, no matter its accuracy, can either repeal the rules of racial standing, nor prevent their operation.’

Understanding racism, its causes and how it is maintained – rather than helping to address it – increases frustration. Joy speaks to challenges and disappointments, as well as glimpses of progress. It is hard for White presenting people to learn, feeling exposed, disconnected, frightened to immerse themselves, for fear of being labelled ‘racist’. Progress feels clunky, slow, and when there is not enough ‘movement’ it is disappointing for the learners and those who facilitate this stuff. That can lead to white silence, and ‘black’ silence and frustration.

But, not working on racism isn’t an option. Believing that this can all land better has to be an option!

The first stage of this ‘Far in Far out’ project involves collecting data from 20 sessions, from Joy’s facilitation practice. This might include complex dynamics surrounding challenging and transforming moments, thoughts and feelings as facilitator, and capturing learning themes and insights. Participants will be from a number of public and voluntary sector organisations, who wish to work on racism. Further stages of this project will include reflections on facilitation of personal and collective ‘edges’ of growth, and bringing out this learning, as a handbook, or perhaps podcast.

Joy Warmington is CEO of brap, a leading UK Charity, addressing issues of equality, diversity and human rights, since 20 years. Joy is in constant practice as a skilled facilitator, focusing on organisational facilitation, leadership, conflict resolution and anti-racism training, always with a dedication to stretching what’s “possible”.