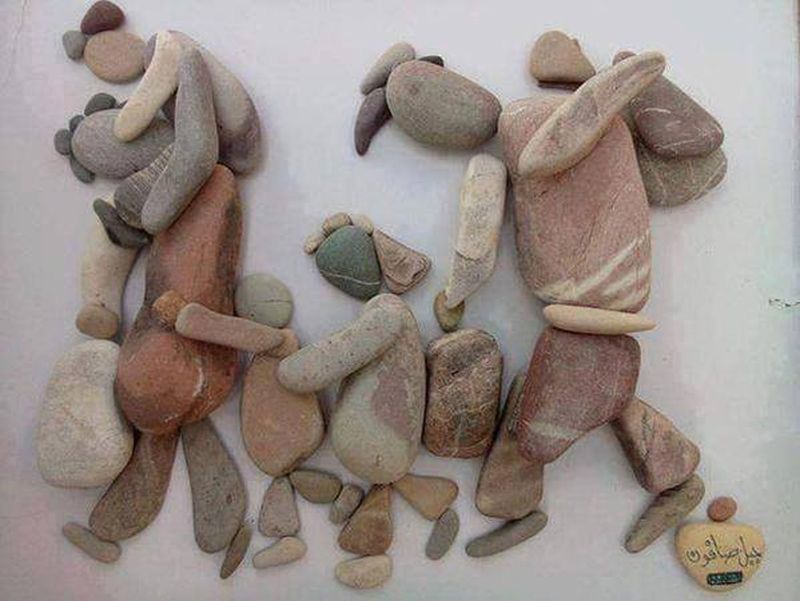 Some months ago, I shared a post on Facebook. It was a simple image of refugees walking, bags on shoulders – made out of pebbles – by a Syrian artist, Nizar Ali Badr.

The caption said ‘please share this image as a sign of solidarity among all the people of the planet whose lives are destroyed by war.’

Someone wrote in the comments: ‘And in solidarity with women who are raped.’

Incidents of sexual assault and rape, committed by refugees, had recently been reported in Europe. These incidents had been used to rouse racism and sentiment against refugees. And in turn, people were being accused of playing down these incidents in order to protect refugees.

I bet that comment on my post was meant to be ‘even-handed’. I think it was highly inflammatory.

There’s nothing that matters more to me than for all of us to grow in our awareness and compassion, so that we can truly support our wholeness. So, that we are not split apart into polarised conflicts, whether internally, or inside of our organisations, communities and societies.

As a facilitator, there’s nothing more important to me than feeling in touch with a deepest sense of welcome to everyone, every issue, and any interaction needed.

Lately, this kind of quasi even-handedness has been inflammatory towards the Black Lives Matter movement.

It comes out of a tendency to be unaware of where we have privilege and so we blur things that need differentiation.

So, we’ve all seen that when someone says ‘Black Lives Matter’, there’s the retort ‘All Lives matter’. Inflammatory, no matter how it was meant.

Of course all lives matter. As so many have patiently said over these weeks and months, the point is that it is black people who are getting killed by police, and that this outrage has been normalized in our society.

Around the world, there’s nothing more dangerous than when a government, military or police force does not protect the rights of its citizens, and instead threatens and turns against them.

In the United States, (and the problem is not only in the US), black people are being killed by systemic, institutionalised racism and violence. And all of us are needed to call for accountability from our police force and work together for systemic change. We must do this.

Sadly, as we all know, institutionalised racism and violence against black people in the United States (and elsewhere) isn’t new. It’s been with us since the days of slavery. After hard won struggles in human rights and civil rights, it hits hard to look at again and again.

What’s maybe new is looking at it so clearly and so often on video, thanks to the smartphone. It makes it harder to say in that quasi ‘even-handed’ way, “Well maybe it was an overreaction during a threatening incident, and the cop was just pushed too far” or “We don’t know exactly what happened.”

The bottom line for any democratic society is to protect human rights, civil rights and safety of one’s citizens and residents. If we don’t believe in the responsibility and capacity of police to serve our communities, if we don’t hold our selves and our public servants accountable as a society, then we normalise and legitimize this violence.

For god’s sake – let’s not be half-hearted or blasé, while appearing innocent and ‘even-handed’. Let’s stand together wholeheartedly and with full resources against systemic racism
and violence, and for accountability. That would give the ground from which to then focus on education, training, and facilitated interaction and dialogue, to grow in our awareness, within the police force, throughout society and inside each of us.