”A project is not only what you intend. Rather, it has its own identity, its own dynamics, its own life and dreamlike qualities that are straining to come into being. It creates you. Writers, filmmakers and all creators testify to this experience – you have a plan for the book you write and suddenly the book has a mind of its own. … In Process Work, we say the dreaming’ seeks people out to express itself. You think you are going after an idea, but if you are attentive, you might notice that you are at the service of the idea. You are like the bee that identifies as seeking the pollen for food while all along the flower has devised colours and patterns to attract the bee. She propagates herself by having the bee spread her pollen…. The Process Work paradigm and its techniques are at the heart of each contribution… While each area of application is distinct, you’ll see the central idea is simple, consistent and effective.”

(In the Introduction to ‘Deep Democracy: Where Fields Meet’, Proceedings of the first IAPOP International Conference, London, 2007)

The symposia are an exciting and key part of the Far in Far out programme, to be able to gather and share learning across the different projects, and regions of the world.

And on Jean-Claude’s very last day here, he was talking about symposia, an atmosphere of sharing our learning with one another, so vital for this world of ours.

Expanding on this idea of collective learning and growth, we have invited project leaders to informal Symposia, in order to exchange and deepen learning. Every project has something uniquely valuable that others can learn from, and we believe this is a great opportunity to share, ask about, and discuss ideas, methods and results. The learning from these Symposia will be published and disseminated, in order to contribute to the wider fields of peace-building, sustainability, consciousness studies, and genocide prevention.

After we welcomed everyone, we began with a short inner work, followed by a fishbowl discussion with leaders of 4 projects spotlighted in the middle. We were all present for this, followed by space for questions and comments. After a short break, we had facilitated discussions in the break-out rooms, so that everyone had a chance to exchange learning and to connect. Below is a brief summary of the day.
*
It was beautiful to see all of the project leaders and mentors gathered, to begin to connect to one another, to consider how our different projects link together in the Far in Far out Programme.

And a special thanks to Denyse, for interpreting for all of us!

As Innocent said, all of us are linked together – we are all working in different contexts, but we are all doing this work together, processing historic oppression and its ongoing impact…  And he describes how collective trauma is so profound, and will take a very, very long time to heal. When we cry together, there is also deep healing, and the humanity we all so need.

Below are some of the themes that came up in the ‘fishbowl’ (the small group spotlighted in the middle)
Thanks again to Gimu, Jay, Michar, Mvuselelo, Undine, Maaianne, Neus and Boris

–  Youth: The youth felt so surprised – that it was eye opening, to be truly asked to design the programme, rather than be told things. That they felt respected in their leadership.

–  Sensitive hot spots: It makes such a difference to be able to stay with sensitive spots, hot spots, and model this possibility, to talk about impossible things.

–  Gender violence: The importance of education about gender dynamics in the culture, and to look directly at gender violence, especially in respect to processes of reconciliation.

– Caste: The agony of oppression based on Caste, throughout history and its ongoing perpetuation in mainstream attitudes. Feeling hurt, all the time. Honouring the spirit of  Ambedkar, as a leader, and as the ‘role’ in us who stands up.

–  Fear and Hate: Support to find the courage to talk about the agony and fear. And to make space to express the hate towards the ‘oppressor’ – in this case the upper caste mainstream Hindus – in a way that can bring accountability and healing, and not replay the violence towards ourselves or others.

–  A focus on one’s presence as a facilitator: How we are present in our feeling, and how we relate to our co-facilitators and the group is what matters most to people.

– Respecting and also challenging cultural attitudes: Bringing awareness and facilitation about attitudes that we have inherited. Laws may change, but in everyday attitudes and relationships, the oppressive system replays. (This was spoken about in respect to gender. Rwanda is one of the most advanced countries in the world in respect to women’s rights, but attitudes remain within the culture. And in India, there are key advancements made regarding human rights, but the profound caste discrimination against Dalits or ‘untouchables’ prevails. As Europeans begin to increase awareness and accountability for the history and legacy of colonialism, attitudes of white supremacy persist.

–  Ghost Role of  ‘God’… ‘God’ was brought up in relation to the Caste system, which is deep-seated in the Hindu religion.

– Ghost role of ‘God’ as internalized beliefs: ‘This is the way God intended’, condoning oppression – in respect to Caste supremacy, Male supremacy; White supremacy; and more.

– Ghost role of ‘Men’ …This was brought up in respect to the role of men in the Genocide against the Tutsi in Rwanda, gender based violence and negative toxic male leadership. These dynamics occur throughout the world.

– Ghost role of the ’the Old Guard’, those men who fought off the Colonial powers, and the unconscious loyalty to those who died for us to be here.

– The importance of joy, the role of joy – in the Trans movement – needed to be able to sustain and support pathways beyond the agony of discrimination.

–  The importance of joy and vitality, a sense of possibility: what emerges, what’s next – can we find pathways forward, beyond the repeating trauma of history, new patterns and possibilities.

–  Youth: Youth as the actual young people in our communities, and youth as a Role (a part of each of us.) With awareness of the great difficulties facing youth, and depression, there is also the emergent sense of vitality and future. Turning to life!

And some of the themes that came up in the Break out groups:
– Feeling moved by the conversation
– Authoritarian governments and how authoritarian attitudes replicate and replay inside of us
– The role of the new generation in terms of leadership and finding new pathways
– Youth, children, how to create safety as well as opportunities to engage in the world; and how to be in touch and talk deeply about the serious problems they face, as well as focusing on life and vitality

Going forward:
– Recognizing and using your own leadership, to support others in their leadership.
– Recognizing how we are all connected in our work and hearts.
– Feeling happy about our collective will, here among the Far in Far out project leaders and mentors… that makes such a difference. The personal connections we make together matter, linking us in both the agony and the joy… and in a spirit of possibility.
–  Recalling ‘Youth’ as that part in each of us who can rediscover hope and possibility just when it feels impossible.
– The longing in each person’s heart. 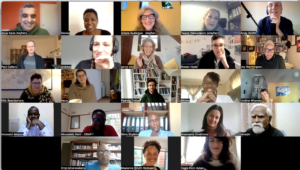