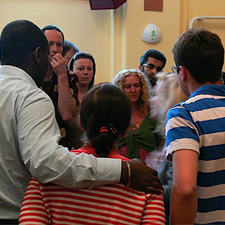 Europe Matters – You Matter’ focuses on building awareness of our relationships within Europe and supporting thriving multicultural societies by addressing individual and collective awareness around issues underlying our relationships among people living in Europe.

We coordinate, deliver and facilitate large forums, in cooperation with partner organizations and supported by the EU. Five-day forums are attended by people living in more than 20 countries and many more cultures who gather to debate and process issues we face in modern Europe. Europe Matters includes facilitated panel discussions, small and large group process, and a training component on conflict facilitation and diversity issues.  It includes working with our collective and personal histories and identities, including our colonial history and its impact, as well as the legacy of war, genocide, and communist history on our continent, and building new relationships in multicultural society.   Europe Matters Forums took place in 2007 and 2009, both in Slovakia and in 2012 in London. An upcoming Europe Matters is being planned for Vukovar/Croatia.

History of Europe Matters – You Matter